Getting to know Kyle Carey

Last week, the Cheshire Phoenix confirmed the addition of former GB U20 international Kyle Carey on a short-term contract. I caught up with him ahead of his debut in Phoenix colours.

The 23-year-old hailing out of London made his debut in the NBL D1 at the Lancashire Spinners in the 2015/16 season before going through the American collegiate system.

The 6’6 swingman spent his freshman year at Northern Colorado in the Big Sky Conference (NCAA D1) before transferring to Barry (NCAA D2) ahead of his sophomore year.

Carey was handed his first professional contract by the now-defunct London City Royals at the start of the 2018/19 season, however, an unfortunate injury on his debut meant that his BBL season was cut short. Carey returned to the NBL in January 2019, where he suited up for the Kent Crusaders before returning to the Royals for the 2019/20 campaign.

I asked Kyle about what kind of player he sees himself as and how he can help the Nix this season, his time as a student-athlete in the US, his favorite arena that he’s ever played in, and much more!

My surprise question focused on Carey’s go-to Nandos order…and his answer did not disappoint!

Kyle, first of all, welcome to the Cheshire Phoenix! How does it feel to be part of the team?

It feels great! The practice we were able to get during this week has been good, got a chance to get familiar with the team & I’m excited to get my season started.

What kind of player are you and what are you hoping to bring to the team during your time here?

I’d like to say I’m a versatile player & can do a bit of everything. Looking at how the Phoenix play they bring a lot of energy on both ends of the floor, that’s what I take pride in the most.

You’ve played in the BBL before so can we expect you to provide instant impact?

Humbly speaking I believe so, playing with the Royals was perfect for me just getting my feet wet in this league, I can’t wait to get started!

Did you know any of the guys on our roster before you signed?

And the guys who you didn’t know before you joined…what have you made of them from the few practices you’ve had together?

They welcomed me in with open arms and got me up to speed on the plays which I appreciate a lot. We got a few scrimmages in during the week and it’s a very talented group with a lot of weapons.

Let’s talk about your NCAA career…what is it like for a guy from London to study and play basketball at a university in the US?

It had its ups and downs for sure. I didn’t play as much as I would have liked so it can get to you mentally if you let it. But the setup is amazing especially at D1, 24 hours a day access to the court is something you don’t get over here.

What did you study while playing basketball?

Who is your favorite player of all time?

Which NBA team do you support?

Wherever LeBron is at 🤣 The Miami Heat are my first love though, D Wade & Shaq kind of got me into basketball.

And finally…what is your go-to Nandos order?

No sides or drink?

Nah the side just takes up the room the chicken could’ve had. 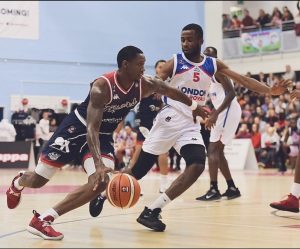