The Nix will look to obtain their second win in front of the Sky Sports cameras when they’ll take on the Giants at the University of Worcester Arena later today.

Cheshire opened Sky Sports’ coverage of the BBL with a 92-82 victory over the Sheffield Sharks on December 3rd 2020.

Ben Thomas’ side comes into the game brimming with confidence following their comprehensive 75-64 victory over the Glasgow Rocks on January 3rd.

Danny Byrne’s men haven’t played a game since the 20th of December, when they defeated the Plymouth Raiders at home, 88-79.

The Mancunians won both meetings against the Nix in the BBL Cup group-stage.

Pharroh Gordon’s injury status has been upgraded to GAME-TIME DECISION.

Where: University of Worcester Arena

The Giants are 3-3 in the regular season and have also reached the Semi-Final of the BBL Cup, where they’ll face the London Lions.

Byrne’s side has picked up just one win in their last four games in the regular season.

The Mancunians have had a 19-day break since their last competitive game.

Lyle Hexom leads the Giants in scoring with 17.8 points-per-game on 43.9% shooting from the floor.

Breaon Brady leads the league in rebounding with 11.5 boards per night. 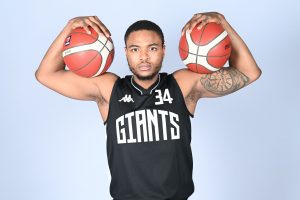 Manchester Giants: Breaon Brady — Manchester’s big-man averages 16.5 points and 11.5 rebounds per contest on 56% field-goal. Brady has started all six games in the BBL Championship. The 6’8 Houston alum draws 4.2 fouls per contest, which is the 7th highest in the league. Brady will have to outperform Jimbo Lull to give the Giants the best chance of winning tonight.

Cheshire Phoenix: Jimbo Lull — The battle of the bigs will be the one to watch tonight. Lull leads the Nix in scoring and rebounding with 20 points and 8.8 boards per game. Most of Lull’s points come from two-point range (61.3% FG) but he has shown that he can also hit the outside shot (50% 3PT on 2.3 attempts-per-game). Lull must use his size advantage over Brady wisely.

Ben Thomas: “We’re really looking forward to playing in front of the Sky cameras today. Tonight’s game against the Giants will be tough, these derby games always are.

“We’ve had a good week of training and we are looking to get some momentum with another good performance and win.”

The Nix are next in action at the EPSV against the Sheffield Sharks, on the 10th of January, 5 p.m. tip-off.