Cheshire Phoenix will take on the Bristol Flyers at the SGS College Arena in a battle for the regular season head-to-head.

Last time out, Mike McCall Jr. nailed a last-gasp, double-clutch three-pointer to win the game for the Nix, 71-69.

The Flyers haven’t played a game since the 28th of February, as their fixtures against the London Lions and Newcastle Eagles were postponed in accordance with the BBL’s Secure Play Protocols.

How to watch: Flyers TV

The Flyers have lost 13 of their 21 games in all competitions.

Bristol have picked up just two wins in 10 games at the SGS College Arena (all competitions).

The Flyers last played on the 28th of February against the Manchester Giants (93-89 W).

Following the agonising loss against the Phoenix, Andreas Kapoulas’ side triumphed against the Surrey Scorchers & Manchester Giants however they dropped their game against the Newcastle Eagles.

The Flyers are restricting their opponents to just 31.3 rebounds per contest, the lowest in the BBL.

Kapoulas’ men average 19.1 assists-per-game, the fourth highest in the BBL.

Teddy Okereafor is Bristol’s main distributor, at 5.3 assists per game, and he also ranks first in steals (1.9) and three-point percentage (43.4%).

Josh Rogers has the best two-point percentage (72.7%) in the BBL. The Bristol-born forward is also averaging 37.5% from three-point land this season.

The Flyers have won three of the last five meetings between the two sides. 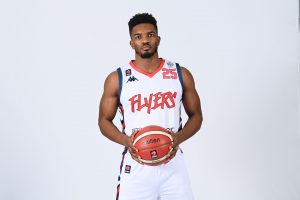 Bristol Flyers: Marcus Delpeche — The American power-forward/center leads his team in points and rebounds and also seems to enjoy matching up against the Nix. Delpeche posted a 22-point, 13-rebound double-double in the his first encounter against the Nix and a 13-point, 19-rebound double-double in the last meeting between the two teams (February 12).

Cheshire Phoenix: Mike McCall Jr. — The American guard was spectacular in the last fixture between the two sides. McCall tallied 23 points on 55.6% FG and 42.9% 3PT. He didn’t commit any turnovers in 26 minutes on the court and capped off his performance with a cold-blooded game-winner over ex-Phoenix shooting-guard Ben Mockford.

Ben Thomas: “With the head to head on the line we really need a good team performance today.

“Bristol are a physical team who will make us work for 40 minutes.

“These are the games where we need to lock in and approach it with the right mindset. It’s a must win!”

The Nix will be back in action at the EPSV on Sunday 14 of March, against the Manchester Giants in the BBL Championship. Tip-off is scheduled for 5 p.m.