Over 60 children took part in the inaugural Cheshire Phoenix Primary School Invitational basketball tournament in Uganda as the Nix continue to expand their community programme in the African country. 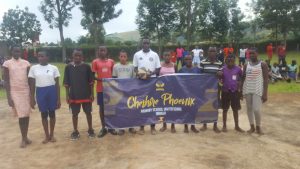 Phoenix’s link with Ugandan basketball began in 2005 when ex Head Coach and chairman Mike Burton joined forces with his daughter’s school, Dean Close in Cheltenham. Their aim was to improve the facilities and act as a beacon of hope for disadvantaged children through the sport of basketball.

The first school that received support from Burton and his daughter was Nyakatukura Memorial Secondary School, a small institution with extremely poor facilities in the remote town of Ibanda, which is situated roughly 200 miles from the capital city of Kampala. The school originally had 140 students, most of whom were orphans having lost their parents, mainly to HIV, but has now expanded to 550.

Burton, who retired from Ellesmere Port Catholic High School in 2006, was asked by his daughter if he would build a basketball court at the school, to which his response was a resounding yes. Before the ex-Nix coach arrived in Ibanda, basketball was an alien sport in the South East of Uganda. Having visited the school over the years, improving the facilities and building the basketball court, the school went from strength to strength.

Over time, Burton began to get more involved with the PE department and eventually started to assemble teams that would compete at town, district and national championships – but not in basketball. Initially, the Ellesmere Port native focused on helping to improve the schools overall athletic department, in which football, volleyball and netball were the most prominent sports.

The ambitious Mike Burton continued to support the school on and off the basketball court as he sponsored most of the sports teams and contributed to the cost for boys’ and girls’ dormitories to be built for the 350 children who lived on site. 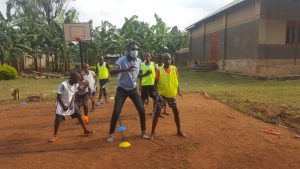 The secondary school went from strength to strength and so the next project was to involve the primary schools, with Cheshire Phoenix more than happy to lend a hand to the founder of their club – after all, the Nix know a thing or two about community initiatives in primary schools.

Gary Thomas, Cheshire Phoenix chairman, was keen to get involved personally in the project and pledged to supply the school with all the necessary tools to further their success. The Phoenix frequently donated playing kits and equipment such basketballs and hoops. Furthermore, on special occasions, the club would send over professional players’ trainers, with significant contributions also coming from the club’s junior programme.

Nix’s current captain, Jalen Hayes, is one of many players who has donated his shoes to the children at the school.

“When I heard about what they are going through, it made me realise how fortunate I am, as professional athletes, more often than not, we don’t even realise,” said Hayes. “Even just the difference in utilities that we have access to compared to Uganda is so shocking and pretty sad to be honest, so it’s nothing for me to try and help by any way that I can.”

Former fan-favourite C.J Gettys, who stands at 7’0 tall and wears size 16 shoes, provided then chairman Mike Burton with a comical story to tell.

“During a training session, Gettys took off his shoes and launched them off of the court saying that they were too tight. I said to CJ, ‘if they’re still there at the end of the session, they’re going to Uganda,’ said Burton. “He said to me, ‘Burt, you can have them.”

The shoes, worth over $500, a sum which amounts to yearly salary for a teacher in Uganda, are now the prized possession of a 6’5 student at Nyakatukura Memorial School. 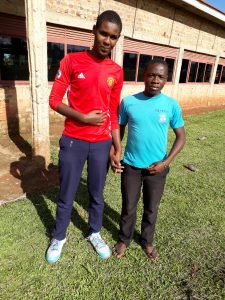 Phoenix, via club directors Gary Thomas and Mike Burton, upped the ante by employing Tumusiime Douglas as a full time basketball coach after his original teaching contract at Nyakatukura ended. Tumusiime would initially attend seven different primary schools in Ibanda to teach the fundamentals of the sport, coaching around 600 kids a week in the programme.

In addition to employing Tumusiime, Phoenix covered the costs for basketball rigs, valued at roughly £100 each, to be built in each of the seven schools.

“Having witnessed Mike’s generosity and contribution to the programme, it was something that I really wanted to get involved with,” said Thomas. “Being able to help underprivileged kids enjoy the sport of basketball, just like we’re able to, is really pleasing and the financial contribution is nothing in comparison to the effect it’s having on their lives and communities.”

As well as covering the cost for the installation of basketball rigs, Thomas contributed a further £1,000 to provide over 100 basketballs to the programme, as none were available in Uganda. 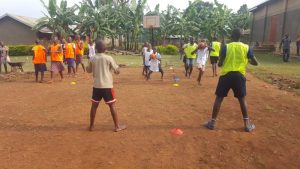 Following a successful period of modernisation and continuous improvement of playing standards, it was time for Cheshire Phoenix to host their first-ever competitive tournament.

The competition, which was made up of five of the seven schools under the ‘Cheshire Phoenix Primary School Academy’ umbrella, turned out to be a huge success as over 60 children participated, with the organisers featuring on the local radio station promoting the event.

With the Chief Education Officer and the respective schools’ headteachers in attendance, the winners of the tournament were Nyakatakura Primary School after they defeated Bufunda Primary School 10-8 in the final.

“I was lucky enough to be there, it was a blessing,” said Kosam, the district’s Chief Education Officer. “Douglas has always consulted me and I believe that this is really needed in our community.”

Poly Atwiine, from Nyakatakura Primary School, led his team to victory and was crowned MVP in the district’s first ever tournament.

Having been heavily involved in the planning and preparation for the competition, Tumusiime expressed his appreciation for Phoenix’s continued support for the project.

“The tournament was extremely successful and although it was the first time all of the schools participated, there was a lot of joy and fun,” said Tumusiime. “I have great appreciation to the Nix for their continued support.”

Despite not being able to attend the event in person, Burton reflected on the inaugural tournament with real pride – suggesting that the potential of the project is ‘limitless’.

“The progress has been phenomenal and it makes me feel so proud of what we’ve been able to do, being able to have a link with Cheshire Phoenix has made these kids believe in their ability to perform,” said Burton. “There is no end goal to this project, it’s limitless and we just want to keep moving it along and raising the profile of basketball in the area.”

Phoenix continue to support the primary school basketball initiative in Ibanda, with plans already in motion for next term’s tournament. The club hopes to attract even more participants and further improve their community programme in Uganda.