Cheshire Phoenix dropped their third consecutive game in the BBL Championship on the road against the in-form Plymouth Raiders.

Paul James’ men claimed their seventh straight win in the regular season and secured the head-to-head over the Nix in the process.

The visitors started the contest well as they won the opening frame by three points, however the hosts managed to create a double-digit separation for themselves before half-time, as they won the second stanza by 27-to-12.

The Raiders weren’t as dominant in the third frame but they still managed to increase their cushion to 14 before the start of the decisive quarter.

Cheshire closed the last three minutes of the game with a 17-7 run, however it was a case of too little, too late for Ben Thomas’ team, as they still lost the game by five points and fell to 12-12 in the regular season.

The Raiders made 54% of their shots from the field and 38% from three-point land. They out-rebounded their opponents by 33-to-31.

The Nix had an efficient night too, as they converted 51% of their attempts from the floor and 40% from deep. Thomas’ men obtained 22 assists to Plymouth’s 19.

Rickey McGill poured in a team-high & joint-game-high 23 points on 10-of-17 shooting, to which he also added four rebounds, four assists and three steals.

GB international Ashley Hamilton contributed with 19 points, nine rebounds and three assists off the bench, while Will Neighbour (15) and Denzel Ubiaro (10) also supplied their team with double-figure points.

Sol Rolls-Tyson returned to Phoenix’s rotation for the first time since the 13th of December 2020 but was not utilised by coach Thomas. 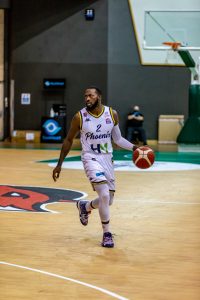 Plymouth opened the game with a three-pointer from McGill, but the Nix answered back well and took their first lead of the night thanks to baskets from McCall and Lull. Plymouth’s most prolific scorer — Mike Morsell — picked up his second foul of the evening at the 7:36 mark of the opening frame. Carey increased Phoenix’s advantage to four with a lay-up in transition at the 6:54 mark. Cheshire’s lead was doubled just two minutes later, however the hosts managed to reduce the deficit back down to four at the 3:46 mark. The Raiders shaved off one more point before the end of the quarter, which meant that the visitors went into the second stanza with a three-point cushion.

The two sides traded buckets in equal measure in the first two and a half minutes of the second quarter, however the Raiders then added four unanswered points through Ubiaro and McGill and took the lead at the 7:26 mark. Hamilton increased Plymouth’s advantage to two after he split a pair of free-throws at the 7-minute mark, before Hayes tied the game at 24 points apiece with a pretty finish at the 6:36 mark. The home side prompted Ben Thomas into a time-out at the 2:52 mark after they embarked on a 10-2 run following Hayes’ game-tying basket. The Raiders gained their first double-digit lead of the night after Elvisi Dusha knocked down a three-pointer with 1:16 left in the first half. The Nix were outscored by 4-to-2 in the final 35 seconds of the first half and went into the break down, 30-42.

Phoenix attempted to cut the deficit down to single-digits, however their efforts were in vain, as the Raiders found a way to answer back every time Thomas’ team added points on the board. Plymouth’s lead increased to 15 at the 6:20 mark after McGill converted a tough and-one play. Hayes drilled a three from the corner at the 4:48 mark, however McGill reinstated Plymouth 15-point advantage on the next possession. Cheshire managed to trim the deficit down to 12, with three minutes left in the penultimate quarter, however they were outscored by two in the last 180 seconds and went into the fourth trailing, 51-65.

Hamilton opened the final frame with an and-one play over Pharroh Gordon, which pushed Plymouth’s advantage to 17. McCall replied with a trey-ball from the corner. Hayes followed up with a silky-smooth lay-up. McCall’s triple at the 5:58 mark made it a three-possession game, however the Nix allowed their McGill to grab an offensive rebound which resulted in a three-ball from Will Neighbour at the 5:16 mark. Lull added a three of his own, with 4:53 left in the game. Plymouth cancelled out Cheshire’s good spell as Neighbour ignited a 6-0 run for the hosts, pushing their lead back to up 15 at the 3-minute mark. The Nix outscored their opponents by 10 in the closing minutes of the contest, however their late surge wasn’t enough to prevent the Raiders from obtaining an 88-83 victory.