Cheshire Phoenix will aim to seal their place in the BBL Play-Offs with a victory over the Plymouth Raiders later this evening.

The Raiders triumphed in the first two meetings between the two sides in the 2020/21 regular season, however this will be their first trip to the EPSV since the 12th of January 2020.

The Raiders have a 26-12 record in all competitions.

James’ team has picked up 13 wins and just five losses on the road in all competitions.

The Raiders are currently third in the BBL Championship, with a 17-9 record after 26 games.

Plymouth ranks in the top four in both hustle stats (steals & blocks) with 7.8 steals (4th most in BBL) and 3 blocks (2nd most in BBL) per contest.

Plymouth ranks first in rebounding, with 38.6 boards per night, however they’re dead last in assists-per-game, with just 16 on average.

The visitors have the second best defence in the BBL, at just 77.2 points-allowed-per-game while their offense ranks fifth, at 84.2 points-per-game.

The Raiders commit the most fouls in the BBL (20 per contest) and also turn the ball over at a high rate (14.4 turnovers per game – 2nd most in BBL).

Mike Morsell and Ashley Hamilton are tied in scoring, at 15.8 points-per-game apiece, while Rickey McGill is slightly behind the two, at 14.2 points-per game. Will Neighbour (9.9) and Chris Porter-Bunton (9) are on the cusp of averaging double-figure points.

McGill leads the Raiders in assists and steals, with 5.2 dimes and 1.8 steals per game.

Prince Ibeh averages the most blocks in the BBL (1.8) and also leads Plymouth in rebounds-per-game (7.3), however he hasn’t played since April 3rd.

Former Nix centre Michael Ochereobia is averaging 6.7 points and 6.4 rebounds for the Raiders.

Plymouth Raiders: Rickey McGill — Plymouth’s guard has been on a tear since the 5th of March, as he’s scored 15 or more points in eight consecutive games. He’s averaging 14.2 points, 5.2 assists, 4.1 rebounds and 1.8 steals per game in the regular season.

Cheshire Phoenix: Kahron Ross — The Nix will need a big performance from their star point-guard against the in-form Raiders. Ross scored a joint team-high 14 points against the London Lions however his assist-to-turnover ratio was below-par. The Lehigh alum must score and distribute at a high level against the Raiders. 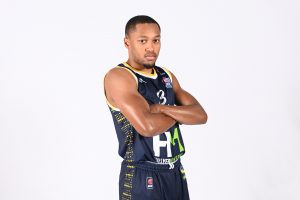 Ben Thomas: “Today’s game against Plymouth is huge! We know how to compete with this team, we’ve done it in both games this season. But we know we have to do it for 40 minutes.

“They’re very talented and have a lot of depth. We just need to outwork them, especially defensively.”

The Nix will be back in action at the EPSV on Thursday 22nd of April, against the Glasgow Rocks in the BBL Championship. Tip-off is scheduled for 6 p.m.