Cheshire Phoenix will face off against the London Lions in the First Round of the BBL Playoffs at the Vertu Motors Arena in Newcastle.

The Londoners won the regular season series between the two sides, 2-to-1.

Vince Macaulay’s team finished the regular season in style, as they embarked on a sizzling 11-game winning streak (could be extended to 12 with a victory over Sheffield later today), which included a 26-point victory over the Nix.

At the time of writing, the Lions have a 22-7 record in the BBL Championship, with their last fixture against the Sheffield Sharks due to be played today at 6 p.m.

The Lions triumphed in the first meeting between the two sides by a score of 110-99 before dropping the next game at the EPSV 80-87. Macaulay’s men dominated the Nix at the Copper Box and sealed the season series with a 87-61 triumph.

The Lions reached the finals of the BBL Cup (lost vs. Newcastle) and BBL Trophy (won vs. Plymouth) this season, while the Nix crashed out in the Group-Stage of the Cup and Quarter-Finals of the Trophy.

The Londoners had the best offense in the regular season, as they averaged 90 points per contest and shot 46.3% from the floor, 39% from deep and 77.4% from the free-throw line.

The BBL Trophy champions also averaged the second most fouls per game (19.3).

London’s defence ranked just seventh league-wide, at 81.4 points allowed per game. Opponents shot 43.7% from the floor, 33% from behind the arc and 72.6% from the charity stripe against the Londoners.

Dirk Williams led the Lions in scoring in the regular season, as he averaged 18.2 points-per-game, the second most league-wide, only behind Rahmon Fletcher who averaged 19.2 points per contest.

Williams made more three-pointers (89) than any other player in the BBL.

Chris Tawiah was London’s top rebounder, at 5.7 rebounds-per-game, while DeAndre Liggins led his team in assists with 6.7 dimes per game. 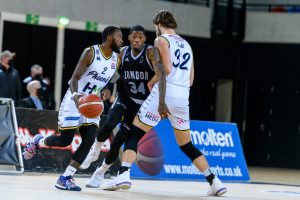 London Lions: DeAndre Liggins — Liggins averaged 14.7 points, 6.7 assists and 5.2 rebounds in the regular season, whilst shooting 41% from three-point range. He has accumulated 11 appearances in the NBA Play-Offs so he will be the most battle-tested player on the court on Monday night.

Cheshire Phoenix: Kahron Ross — The Nix will need a big performance from their on-court leader and MVP candidate. Ross averaged 17.1 points, 5 assists and 4.6 rebounds in the regular season and played particularly well in Phoenix’s 87-80 victory over the Lions back in February.

Ben Thomas: “It’s going to be a tough game but we’ve been locking in all week and we’ve still got a few days of practice before the game and it’s just a case of making sure that we’re focused and ready to go on Monday.”

The second leg of the First Round battle between the Nix and Lions will be played on Wednesday 5th of May at the University of Worcester Arena, with tip-off scheduled for 7:30 p.m.