Cheshire Phoenix must defeat the London Lions by eight points or more in order to advance through to the Semi-Final stage of the BBL Playoffs.

The Londoners obtained a 73-66 victory over the Nix in the first leg in Newcastle on Monday night.

Where: University of Worcester Arena

The Lions had the best offence in the regular season, as they averaged 90 points-per-game, however Phoenix’s defence restricted the Londoners to just 73 points in the first leg.

The Lions made just 43% of their attempts from the floor, 30% from three-point range and 66% from the charity stripe in their first leg triumph.

Macaulay’s team accumulated 10 blocks and five steals on Monday night, however they coughed up 17 turnovers and allowed the Nix to score 42 of 66 points inside the paint.

Dirk Williams, London’s leading scorer in the regular season, scored a game-high 22 points on 8-of-15 shooting (including 5-11 from three-point land) in the first leg.

The two-time BBL MVP Justin Robinson added 17 points and five assists in London’s victory over the Nix, however he suffered an injury late in the fourth quarter and it’s unknown whether he will suit up for the Londoners tonight.

Former NBA player DeAndre Liggins racked up 12 points, seven rebounds and six assists in the first leg, however he missed 11 of 15 attempts from the floor.

The Lions accumulated 18 assists on 28 made baskets on Monday night, however they only had three players in double-figure scoring. 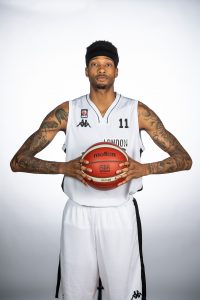 London Lions: Dirk Williams — London’s sharpshooter will look to build on his 22-point performance when the two teams will face off in Worcester later tonight.

Cheshire Phoenix: Mike McCall Jr. — Phoenix’s guard tallied just nine points (3-10 FG) and four assists in the first leg in Newcastle, so he will need to improve his production and efficiency in the second encounter in order for the Nix to eliminate the star-studded Lions.

Ben Thomas: “We can take a lot of confidence from our performance on Monday, we did a lot of things really well. Going in to the game tonight knowing we need to win by more than 8 points means we need to do more of the same and more!

“Yesterday was a really tough day for the club, receiving news about the passing of Dii’Jon but we know have another incentive to go out there and play this game for him.

“I know the NixNation would love to be there tonight, but we are hoping we can do you all proud and get through to the semi finals.”