Josh McSwiggan back in Cheshire

Cheshire Phoenix are pleased to confirm the signing of British forward Josh McSwiggan.

The 6’7 forward spent two years playing for the Portland Pilots in the West Coast Conference (NCAA D1), where he averaged 10 points, 3.7 rebounds and 1.4 assists per game. McSwiggan shot 38% from three-point territory and 81.9% from the free-throw line during his time in Portland.

McSwiggan spent the 2020/21 season in the British Basketball League, playing for the Worcester Wolves. The 25-year-old made 22 appearances (15 starts) and averaged 7.8 points, 2.9 rebounds and 39.5% shooting from three-point range. 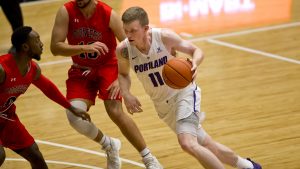 “This signing really adds a whole new dimension to the team. We now have another high level 3 point shooter but with real size and versatility,” said Cheshire Phoenix head coach Ben Thomas.

“Last season with the Wolves we saw, at times, what Josh can do at this level. After speaking to him I know that consistency is one of his main goals this season and we are looking forward to working with him to achieve this.”

Shortly after signing his contract, McSwiggan declared: “I’m really excited to be part of the Cheshire Phoenix this season, I think it’s very fitting being back where it all started for me. I’m extremely grateful for the opportunity and I can’t wait to get to work with the team.”

McSwiggan played for our junior program before embarking on his collegiate and professional career and was part of the 2010 Cheshire Jets U-14 team which went on to win the National Championship.

“I remember Josh as a keen member of one of my junior teams. He had a great attitude, was hungry to learn and worked hard on his fundamental skills. I’m so pleased to see him back where it all started for him.” said his former coach and current Phoenix director, Mike Burton.

Following McSwiggan’s arrival, we are frustrated to announce that Karim Mouliom will not be joining us for the upcoming season due to work permit and visa complications.

“We are truly gutted for Karim, obviously first time round he sustained an injury that kept him out the whole season. The situation now is something that has come up recently and is out of our control. We have been working to find a solution for the past couple of weeks however we have been unable to conclude the situation with a satisfactory outcome. It is very frustrating for the player and the club, we wish Karim every luck in the world with his future career after a turbulent past couple of years as he is a really great person.” said Cheshire Phoenix general manager, James Brice. 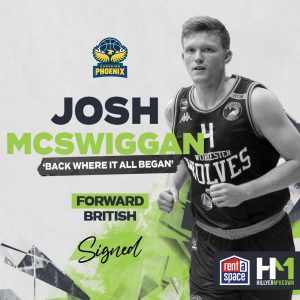