The Nix will aim to improve their BBL Cup record to 2-0 when they’ll take on the Manchester Giants in the home opener and first North West Derby of the season. Ben Thomas’ men come into the fixture brimming with confidence following their 71-64 win on the road against the Sheffield Sharks on Friday night.

Despite not playing a competitive game yet, the Giants will enter the building in good form, having won all three of their pre-season games against USA Select, Plymouth City Patriots and Surrey Scorchers.

The British trio of Jordan Whelan, Jack Hudson and David Ulph has returned for the 2021/22 season, however Lloyd Gardner lost the services of Alex Ouandie, Charlie Britton, Joe Heyes, Zack Powell, Sam Cassell Jr and Donovan Johnson over the summer.

Gardner was well backed during the summer recruitment period as the Giants bolstered their roster with the additions of GB internationals Dan Clark, Will Saunders, Jamell Anderson, Josh Steel. Tyrik Armstrong, Geno Artison, Francois Lewis, Martaveous McKnight and Kingsley Nwagboso also joined the club, while Callum Jones returned to Manchester following a year away in Sheffield.

The Giants won their first pre-season game against USA Select 79-64 and followed up with 61-59 & 86-79 victories over the Plymouth City Patriots and Surrey Scorchers. 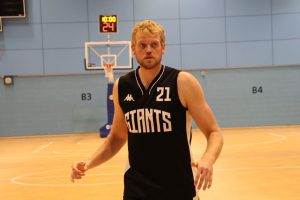 Manchester Giants: Dan Clark — The GB power-forward was regarded as Manchester’s marquee signing when he was announced on the 27th of August. Clark played in the highly respected Liga ACB for the majority of his career and represented Great Britain at EuroBasket 2011, 2013 & 2017 as well as the 2012 London Olympics. Standing at 6’10 he will look to hurt Cheshire on the interior with his size, skill & experience.

Cheshire Phoenix: Teddy Okereafor — The GB starting guard must be at the top of his game against the Giants, as the Nix will look for him to dictate the tempo of the game and lead by example. Okereafor stuffed the stat-sheet against Sheffield in the first game of the season, but he also committed a game-high five turnovers. He must take better care of the ball against the Giants.

Ben Thomas: “Today’s game is a huge one, the derbies against the Giants always carry a little bit more weight than the average BBL game, so we’re really excited for it! Manchester have assembled a really good team so it will be a tough test for us but we’re all really looking forward to getting on the court and competing again!

“We’re a different sort of team compared to the last few years, we’ve got a lot of shooters so we can really stretch the floor and we’ve got guards who will run the offence to our benefit. It’s not going to be as individual as it has been over the last couple of years where we’ve had guys who could create their own shot, this year we’ve got guys who can create shots for other people!

“Judging off the first two weeks of pre-season and the game against Sheffield, the guys shown real togetherness, their attitude and work-rate has been second to none so now it’s just a case of carrying on doing what we’ve been doing in practice and if we manage to do that I’m sure we’ll be successful on the court tonight!

“Finally, I just want to say that I can’t wait for the Nix Nation to be back in the stands, cheering us on, we’re going to do everything we can to make you guys proud, I know you guys have missed us just as much as we’ve missed you so let’s have a great season together!”

The Nix will go up against the Glasgow Rocks on Sunday 3rd of October in the second home game of the 2021/22 season. Tip-off is scheduled for 5:30 p.m.