The Cheshire Phoenix will aim to secure qualification into the Quarter-Finals of the BBL Cup when they’ll take on the Glasgow Rocks at the Emirates Arena later this evening.

The Nix currently hold a flawless 3-0 record over the Rocks in the 2021/22 season, having picked up a couple of wins in the Mike Burton Pre-Season Invitational and one official victory in their first competitive meeting at the EPSV.

The Rocks have already clinched their spot in the knock-out stage of the Cup, after obtaining four wins in their first six games in the group-stage.

The Scottish side bounced back from the 77-84 defeat at the EPSV with a couple of consecutive victories over the Manchester Giants (90-83, away) and Newcastle Eagles (92-84, home).

Gareth Murray’s team has won two out of three games at home in the group-stage of the BBL Cup.

Ali Fraser tallied a 23-point, 13-rebound double-double against a depleted Eagles side in Glasgow’s last outing, while Jonny Bunyan also chipped in with 17 points off the bench, as he made five out of six attempts from deep.

Jayce Hillsman was Glasgow’s top performer in their road win against the Giants, as he notched an 18-point, 13-rebound double-double.

Cheshire’s defence limited the Scotsmen to just 36% shooting from the floor and 25% from three-point range in the first competitive meeting between the two sides.

As a team, the Rocks rank second in the league in three-point attempts (28) and defensive rebounds per game (30.2) behind the Giants. They are tied with the Bristol Flyers for most field-goal attempts per game (72).

American guard Jordan Johnson leads the Rocks in points (19.3), rebounds (6.2) and assists per game (7.2). Elijah Minnie averaged 7.6 boards per night before getting cut by the club last week. 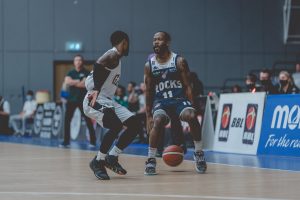 Glasgow Rocks: Jordan Johnson — The former UNLV point-guard leads his team in almost every statistical category, however the Nix did a good job of limiting his impact in the first game at the EPSV. Johnson accumulated 17 points and seven assists, however he shot just 7-of-19 from the field (including 2-7 from deep), committed three turnovers and finished with a negative -7 Plus/Minus, so he must be more efficient tonight in order for the Rocks to obtain their fifth win in the ‘North’ group of the cup.

Cheshire Phoenix: Teddy Okereafor — The GB starting guard showed out in the first competitive meeting between the sides as he tallied 21 points, nine rebounds, four assists and a couple of steals on 40% shooting from deep. He out-played his direct opponent, Johnson, led the Nix to a much-needed win at home and secured the Hillyer McKeown Player of the Game award as a bonus. Okereafor will have to replicate his performance in Glasgow in order for the Nix to punch their ticket to the Quarter-Finals of the BBL Cup.

Ben Thomas: “We know that our performance wasn’t good enough last week against the Manchester Giants so we’ve tried to put things right in practice and today will be completely different game.

“We haven’t lost to the Rocks yet, whether that’s in pre-season or in the Cup so we fancy our match-up against this team.

“We know it’s going to be tough, especially as Glasgow’s home crowd plays a huge part, it’s a long road-trip for us and they’ve obviously got some really good players.

“We’ve just got to come out ready to play and we’ve got to look at ourselves last week and make sure that doesn’t happen again.”

The Nix are next in action at the EPSV against the Newcastle Eagles on the 24th of October, with tip-off scheduled for 5:30 p.m. Tickets are now on sale!