Cheshire Phoenix will end their five-game road trip with a tasty clash against the Leicester Riders at the Morningside Arena.

The Nix were knocked out of the BBL Cup by the Riders last Saturday, despite a gutsy performance from Ben Thomas’ men. Cheshire led for the majority of the night but came up just short in the end as they dropped last week’s meeting 84-to-85.

The Nix are still looking for their first win in the BBL Championship, while the Riders will aim to improve their league record to 2-0.

The Riders have a 1-0 record in the BBL Championship, following a convincing 100-77 triumph over the Newcastle Eagles.

Rob Paternostro’s team finished second in the ‘South’ group of the BBL Cup, with a 6-2 record. The Riders eliminated Cheshire in the Quarter-Final of the competition and will take on the London Lions in the Semi-Final.

The Riders have triumphed in three of the last five encounters against the Nix.

Leicester shot 45% from the field and 37% from deep in last week’s clash against the Nix.

Geno Crandall led the Riders with 24 points while Jackson finished with 17 points and five rebounds. Washington totalled 12 points and a couple of assists off the bench.

Leicester Riders: Geno Crandall — Who else? ‘The General’ dropped 24 points, hauled in four rebounds and dished out seven assists in last week’s meeting against the Nix. The reigning BBL MVP also made the game-winning play, feeding Jubril Adekoya in the paint for the final bucket of the night. If Cheshire can limit Geno’s impact then they’ll also diminish Leicester’s chances of coming out with a win.

Cheshire Phoenix: Teddy Okereafor — The GB guard delivered a ’10/10′ performance in the BBL Cup Quarter-Final against the Riders, as he racked up 10 points, 10 assists and committed zero turnovers. Okereafor will have to improve his efficiency (shot 5-of-15 from the field vs. Leicester) but if he orchestrates the offense the same way he did last week then Cheshire will fancy their chances of stealing a victory on the road. 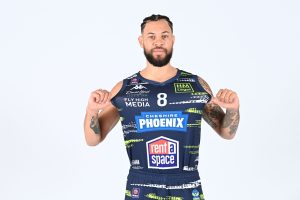 Ben Thomas: “We had a good performance last week against the Riders but ultimately we were disappointed with the final result.

“We’re looking for more of the same in terms of performance, we’ve got to be tough, energetic and ready to fight!

“If we do that and execute the game plan then there is no reason why we can’t come away with a good result!”