Cheshire Phoenix fell against the Newcastle Eagles in a triple-overtime thriller at the EPSV.

The Nix, who were on the brink of securing their first pair of back-to-back wins in the 2021/22 season, showed heart, grit and resilience all night long as they went toe-to-toe with last season’s BBL Cup and BBL Playoffs champions, however they came up just short against Ian MacLeod’s side.

Despite trailing by four points with less than two minutes left to play in the first, the Eagles managed to eke out the first quarter by 24-to-23 after the veteran duo of Rahmon Fletcher and Darius Defore engineered a 7-to-2 run for the visitors in the final 90 seconds of the opening act.

Phoenix’s offense remained just as prolific in the second frame, as they added another 23 points to bring their half-time total to 46, all while limiting the visitors to just 16 second quarter points, earning themselves a six-point lead (46-40) at the interval. 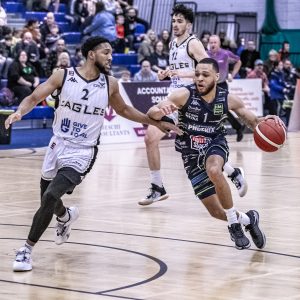 Namon Wright pushed Cheshire’s advantage to double-digits at the 8:07 mark of the third quarter, however the Eagles did not let up and eventually tied the game at 59 points apiece with less than two minutes remaining in the frame. Both sides added four points in the remaining seconds of the penultimate act and went into the final quarter knotted at 63 points apiece.

Ben Thomas’ men worked themselves a seven-point cushion with less than five minutes remaining on the clock, however the Eagles, led by Fletcher, rallied against Cheshire’s momentum and outscored the hosts by 9-to-2 in the final four minutes to send the game into overtime, as the two sides finished with 81 points apiece after 40 minutes.

The two teams traded buckets in equal measure for the next 10 minutes, meaning that a third period of overtime was required to finally declare a winner. The Nix once again found themselves in the ascendancy (108-107) with just over a minute left to play, however they failed to ice the game and allowed their opponents to create a five-point gap thanks to consecutive baskets from inside the paint by Duke Shelton and a pair of free-throws from Fletcher. Michael Ochereobia scored the final basket of the night, however it wasn’t enough to prevent the Eagles from prevailing, 113-110, after a highly-entertaining, action-packed 55 minutes of basketball.

Ochereobia stuffed the stat-sheet with a game-high 24 points, 18 rebounds, four assists, two steals and two blocks in 44 minutes. His front-court partner, Noah Dickerson, added 21 points, six rebounds, and three blocks on 80% shooting from the floor, while Teddy Okereafor finished with a 16-point, 13-rebound double-double, which also included seven assists, a steal and a block.

Larry Austin Jr. once again impressed off the bench, as he supplied the Nix with 16 points, nine rebounds, nine assists and five steals in 40 minutes.

Shelton paved the way for the visitors, as he posted a 22-point, 17-rebound double-double, while Fletcher also had a great game as he finished with 21 points and 13 assists in 51 minutes. Corey Johnson buried four three-pointers (game-high) as he chipped in with 19 points, five rebounds and three assists.