Cheshire Phoenix will look to build on their fantastic 86-67 win over the Sheffield Sharks when they’ll host the Newcastle Eagles at the EPSV later today.

The Nix (1-5) are yet to pick up back-to-back wins in any competition this season. The Eagles (3-2) will come into the building full of confidence following their 12-point win over the London Lions in front of the Sky Sports cameras.

The two sides have met twice this season, in the BBL Cup Group-Stage, with each team picking up a victory on their respective home floor.

Ian MacLeod’s side crashed out of the BBL Cup Group-Stage after they dropped seven out of eight games, with their only victory coming against the Nix at the Vertu Motors Arena.

The Eagles have enjoyed a good start to the regular season, as they’ve picked up three wins in their first five games.

Newcastle have a 1-5 record on the road in all competitions. Their sole away victory came against the Plymouth City Patriots, just before the international break.

The Eagles have won four out of the last five meetings against the Nix.

After five regular season games, the visitors are shooting 49% from the field, 31.1% from three-point territory and 75% from the foul line.

Newcastle’s offense ranks 5th league-wide, with 87.8 points-per-game. The Geordies are joint-first in the assists leaderboard, with 25.2 dimes per game, however MacLeod’s team is also turnover-prone, as they rank third league-wide with 14.6 turnovers per game.

The Eagles trail only the Bristol Flyers (9) in the steals-per-game category, with 8.8.

Last time out, the Nix obtained a 15-point win over the Eagles, however the guests were without star point-guard Rahmon Fletcher and veteran forward Darius Defoe. The Geordies have also added the former BBL Cup MVP Brandon Peel since the two sides last met.

Fletcher leads his team in scoring and playmaking, with 16.6 points and 9.8 assists per night.

Corey Johnson is Newcastle’s second-best scorer and playmaker, with 15.2 points and 4.8 dimes per game. The Harvard alum is Newcastle’s best shooter, as he’s currently averaging 40.6% from behind the arc.

Peel is averaging 10 points and 6.8 rebounds after his first four games, while Duke Shelton leads the Geordies in rebounding, with 10.6 boards per game. The American center is also averaging 14.4 points on 60% shooting from the field. 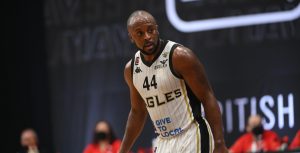 Newcastle Eagles: Rahmon Fletcher — The Eagles missed the two-time BBL MVP in their first trip to the EPSV and his replacement Themba Yabantu failed to trouble the Nix, as he went scoreless (0-6 FG) in 39 minutes. Fletcher dropped 25 points and dished out 17 assists in Newcastle’s win over London on Friday night.

Cheshire Phoenix: Namon Wright — Phoenix’s leading scorer showed out in the last game against the Eagles, as he supplied Ben Thomas’ team with a game-high 33 points on 12-of-16 shooting from the floor. Wright is averaging 18 points and 2.7 assists on 45% shooting from deep after the first six games in the regular season.

Ben Thomas: “It’s been really good to have a break to get our bodies right and get some rest but now we are all really excited to build on a solid performance against Sheffield with more of the same against Newcastle.

“Consistency is the thing that’s been missing for us this year so we’re really focused on getting our first pair of back-to-back wins, especially as we’re playing at home!

“The Eagles are a very strong team and they got even stronger when they added Brandon Peel. They score very quickly and they’ve got a lot of players who can create their own offense so we’ve got to make sure that we get back in transition and slow them down. I feel like if we slow them right down and make it a half-court game then we will give ourselves the best chance of coming away with a victory!”

The Nix are next in action at the EPSV against the Plymouth City Patriots in the BBL Championship on the 19th of December, with tip-off scheduled for 5:30 p.m.