Cheshire Phoenix will take on the Plymouth City Patriots for the first time in the 2021/22 season later today.

The Nix will look to bounce back from their agonising triple-overtime defeat against the Newcastle Eagles while the Patriots will aim to secure their first victory of the season.

The fixture will mark Cheshire’s last outing before Christmas as well as their last home game of 2021.

Paul James’ side crashed out of the BBL Cup in the Group-Stage of the competition, after they finished with a 0-8 record. They’re currently 0-6 in the BBL Championship.

The Patriots are shooting just 39.4% from the floor and 31% from deep, however they’re the most accurate team from the foul line, at 80%.

The Patriots are averaging a league-best 5.7 blocks per night.

Kofi Josephs leads Plymouth in scoring, with 26.2 points-per-game, while Elvisi Dusha is James’ number one distributor with seven assists per night. Cameron King averages the most rebounds (8) while Joe Hart is Plymouth’s top marksman, as he’s shooting 45.2% from downtown. 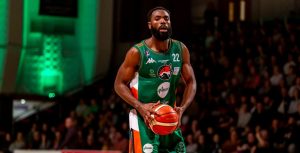 Plymouth City Patriots: Rashad Hassan — The American forward has plenty of BBL experience, having already played for four different BBL teams (Riders, Lions, Raiders, Scorchers). Hassan established himself as an elite scorer during his six seasons in the league. He left the Scorchers before the 2020/21 regular season started but in his last stint at Plymouth he averaged 18.3 points on 61.6% FG% during the 2019/20 season.

Cheshire Phoenix: Noah Dickerson — The former Washington power-forward will have to take advantage of Plymouth’s lack of interior presence and aim for a double-double performance against Paul James’ side. Dickerson delivered one of his best and most efficient performances in a Phoenix jersey in the triple-overtime loss against the Eagles as he tallied 21 points, six rebounds and three blocks on 8-10 FG.

Ben Thomas: “Plymouth’s results haven’t been great but I think that they’ve had some good performances and their most recent acquisitions of Antonio Williams and Rashad Hassan will certainly improve them so we are expecting a tough game but we’re looking forward to the challenge!

After a really tough loss against the Eagles the mood in the camp has actually been very positive! Obviously nobody wanted to lose that game and probably nobody deserved to lose that game but we took plenty of positives from it and we will try to replicate the good aspects of our performance tonight!”

The Nix are next in action at the EPSV against the Sony Centre Fury in the First Round of the BBL Trophy on the 9th of January. Tip-off is scheduled for 5:30 p.m.